>Group bulk purchasing is an affordable means of providing a substantial amount of food. If you have a little time and a group of friends all the easier.  Two separate groups, six seniors from Britannia’s Lion’s Den and a second group of four tenants from Grandview Terrace Housing have made bulk applesauce. Since apples are still fairly cheap in Dec/Jan and can still be bought locally, it makes sense to preserve apples. We simply cooked them up and froze these apples.

The bulk price on the apples worked out to roughly .20 cents an apple. It is possible to buy cheaper, though we opted for a slightly better, and sweeter apple. We produced roughly 50 half litre jars of applesauce at a cost of around .75 cents a jar as compared to about $3 in the store.

Applesauce is about the easiest cooking you can do. Just cut the apples up. Skin on or off. Add a little lemon, cinnamon, and vanilla extract for extra flavour or none at all, depending on your taste preference. Cook with a little water until the apples soften, mash up with a potatoe masher and voila. Makes for the best snack. 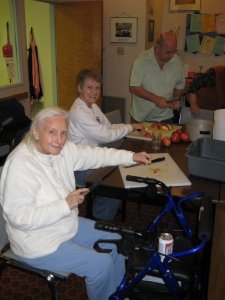 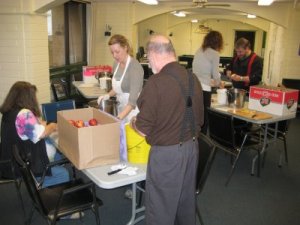